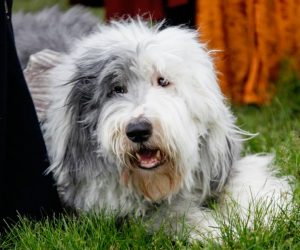 Many of you knew this wonderful boy as Zen, some called him “the Unicorn dog”. His actual AKC name was Shaggy Clown’s Zen Rimpoche. In his too-short life, he managed to live up to all of those names: he was a clown and he was very serene, gentle and Zen-like.

I was lucky to discover Zen in the care of OES Rescue in Minnesota, living with Nancy Hakala. I was across the country in Connecticut. In July 2008, his journey from Minnesota to Connecticut was facilitated by Operation Roger, a volunteer organization of truckers who pick up rescue dogs in one part of the country and drove them to another. Zen traveled with trucker Kathy on her route east. About two weeks after Zen left MN, we picked him up at a truck stop in Millville, NJ.

Zen was a great moose of a fellow. His highest weight was 108 pounds. He was a gentle giant, always considerate with small children and tolerant of our other rescued OES, Sassy. Sassy is quite small for an OES and she is deaf. Nonetheless, she is fearless and spent most of the time she was outdoors, stalking and playfully attacking big Zen. Zen would wrestle her to the ground and put his paw on her gently to hold her down, but the minute he let her up she would pop up and be after him again.

Zen accompanied me to many public events, usually with the goal of entertaining children. One of his “gigs” was as a costumed unicorn at the Connecticut Renaissance Faire where he delighted many fairgoers.

In November 2015, Zen was diagnosed with lymphoma. After a lengthy series of chemotherapy, special diets, and herbs and supplements, he was well enough to be the Unicorn (though he had lost his hair) at the 2016 Spring Faire.

Sadly, about a month ago, Zen began to have difficulty walking. The veterinary neurosurgeon felt the problem was a herniated disk, but Zen wasn’t strong enough for spinal surgery, so his treatments included anti-inflammatories, pain relief, physical therapy, doggie Pilates and a water treadmill regimen. In the last two weeks, Zen re-injured his back and ultimately his rear legs were paralyzed.

Due to the amount of pain he was in, and the lack of joy left in his life, we took the trip to Rainbow Bridge on Labor Day. Zen had two cheeseburgers, fries and chocolate ice cream before he took his journey.

Zenny was my “heart dog” and I am utterly at a loss without him. He taught me so many lessons and helped me toward being a better person. I felt so blessed to have shared his life and at the same time, so unworthy of him. Sassy is also at a loss. She has been searching the yard and woods for signs of Zen. He was her hearing aid.

Although he had a lot of names, Zen will forever be “My Big Boy”.