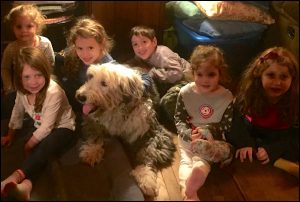 There should be an adage that says, “Dogs have a way of barking their way into our hearts.”  On January 16 our beloved OES, Sammy, crossed the Rainbow Bridge; he was a part of our family for more than 11 years, and he passed at the age of 13 (plus). We know our last Sheepie, Bernie, is taking care of him now, and teaching him about Elysian Fields: once again, Sammy can jump over fences (to help his owners shovel, of course), give big sloppy kisses and frolic in expansive snowy fields.

Sammy was the best dog, and traveled everywhere; he really had two homes – one in the heart of Brooklyn and one in central Vermont; he was equal parts “city dog” and “country dog” as he was happy wherever he was, as long as he was with his family. He herded everyone he met: family members, our cat Chana, visitors, and especially the new additions to the family. He faithfully “guarded” six children, even if they didn’t want to be corralled – and they adored him for it. Of course, guarding meant following you around and getting under your feet! Sammy was a gentle soul who probably would have intimidated a burglar before promptly licking the intruder’s face.

It has taken a long time to write this obituary, because we didn’t want to admit that he was gone. So for the last time, “Good boy Sam. Good boy.”