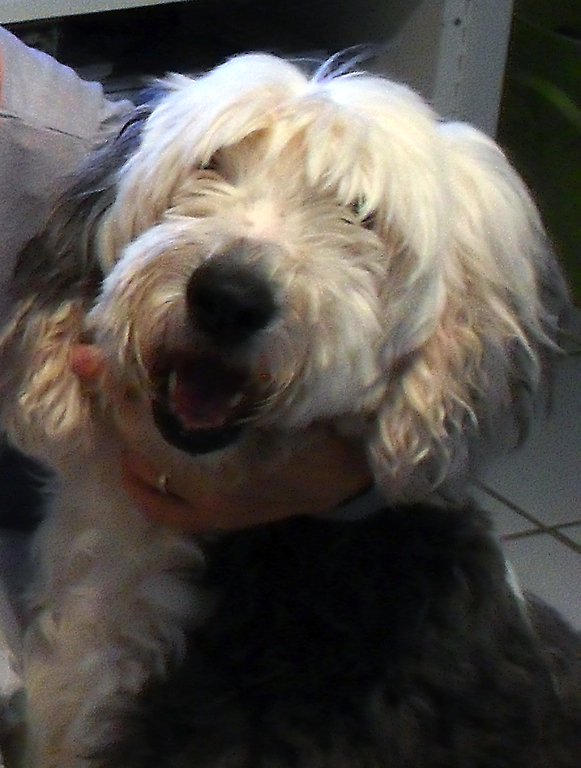 It’s been said that Panda came into our lives for a reason: so she could leave this world in peace. My wife, Adele, found Panda listed by Suzie Fromm on her Facebook page. Panda was 10-1/2 years old and living at the Humane Society in Brevard County, Florida, 144 miles from our home. She was originally adopted through the OES Rescue in Cooper City, Florida 4 years ago, dumped off at the Humane Society in Brevard, adopted out twice after that, and left, once again, at the Humane Society, discarded like unwanted refuse. We already had three dogs and a cat, but for some reason, when I learned of Panda’s history, I said to my wife, “Let’s go and get her”.

Candy and Steve, who run the OES rescue in Cooper City, FL, made the arrangements with the Humane Society for us to pick Panda up on Thursday afternoon, March 31st. Once there, we were met by Suzie Fromm, a warm-hearted fellow sheepie friend who met us with her two sheepdogs and the person who originally posted the ad for Panda on Facebook. Once all the paperwork was in place, we took Panda home. She was in need of a bath, but otherwise in good condition.

Within minutes of arriving home, all the dogs were introduced and getting along just fine. Panda was so sweet and loving, you just wanted to hug her, which we did often. She was instantly part of the family and it felt as if it was truly meant to be. The next morning I took her to be groomed. She looked so pretty with two pink bows in her hair. She was so happy after her grooming too. I think she knew how beautiful she looked! In the late afternoon, we took her to the vet for a checkup and she got a clean bill of health. However, several hours later things suddenly changed. Panda became bloated, started gagging and white bile formed around her mouth. We rushed her to the emergency vet and they told us that her stomach had twisted. She was in tremendous pain. There was an operation to correct the twisted stomach, but involved a long and grueling recovery with no guarantees she would even survive due to the damage to her internal system. We were devastated and could not bear the thought of losing her so soon. But a decision had to be made and we did not want to prolong her agony. We looked into Panda’s eyes and told her how much she was loved and that she had a family now that would always love her. Then she told us with her eyes that she was ready to go. We held her and kissed her and comforted her and said goodbye.

Panda will never ever be forgotten or abandoned again. She had a family and she was loved and she will always be remembered as “our” Panda.