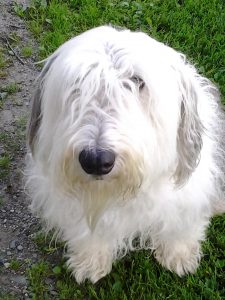 It is with profound sadness that I convey the passing of one of the most incredible Sheepies to ever walk this earth. I know they are all special, but this guy was beyond special.

Mickey McGregor, known to all as “Mickey”, passed away at 4:20 a.m. on Sunday June 12 in my arms. He became seriously ill about suppertime the night before and it is believed that his demise was due to some form of pancreatitis. He was active and healthy to the very end of his life, and for that I am eternally grateful.

I adopted him through NEOESR in September 2004 as a five-month-old pup to live with me on a farm in Colrain, MA. Never confined to our farmyard, he roamed the premises daily, always within sight of the house and me. He never strayed. A constant companion, he was my shadow for nearly twelve years. We travelled, played, and lived together for that time as closely as one could only imagine. Obedient, loyal, dedicated, and a clown forever.

The true spirit of Mickey was his playfulness and the happiness he brought to every single person he met during his life. He always had a wag of his butt, and a lick of his tongue to anyone who said hello to him. Extremely obedient, he never made anyone feel as though he would overstep his bounds. His idea of playing with other dogs was herding them in the yard. You can never forget the happiness and exuberance he demonstrated when a visitor came to the house: never to bark, only to run to where I might be and bounce up and down telling me we had a visitor. Unforgettable.

The greatest thrills were the smiles he brought to everyone, especially young kids. I’ll never forget waiting for a ferry in Hyannis, MA and a little boy of about 4 years of age asking me if he could hug my doggie. I said sure. The little boy walked up to Mickey and put his arms around his head and buried his face into Mickey for several moments without incident. That’s the kind of dog Mickey was to everyone he met. No aggression, just love and happiness. If only we as humans could be the same.

He is and will be sadly missed. He was one of a kind. He exemplified the breed and was a gift from God to me and to all of my friends. He helped me through some very difficult times in my life. As a constant companion and loyal as loyal is meant to be, he was a remarkable being and a remarkable dog.

One last thing in passing: Mickey, I am writing this for you because the world acknowledges your contribution to the peace we need on this earth and the respect and appreciation we need to give to all beings: human, canine, or otherwise. I was blessed with you, my brother, and I miss you every day.