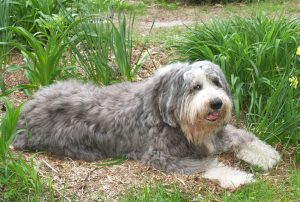 He came into our lives 14 years ago, a cheerful bundle of feet and fur. He loved meeting people and other dogs. His first major event was when he was 5 months old, when he attended my sister’s wedding. Once the wedding ceremony was over, he barked loudly as if to say, “Congratulations, now let’s party!” and had everyone laughing.

Baxter never met a stranger. He considered everyone a friend. We had people that would tell us how terrified their kids were of dogs…and then they’d turn around and find their child hugging Baxter.

Baxter was host to numerous foster dogs. They would arrive scared and unsure. Baxter welcomed them all with his calm and easygoing temperament. For some reason, many of them would grab his left ear and just follow him around. It seemed to calm them down. His vet would ask us why the fur on that ear was so bedraggled. We would just smile. If a foster dog wanted to play, he was up for it. When they just wanted to snuggle next to him that was OK too.

As he got older, his arthritis started to slow him down. But he was always thrilled to go out. Chiropractic and acupuncture treatments and physical therapy helped keep him on his feet and comfortable. But treatments don’t last forever.

Baxter was loved. He is missed. He will be in our hearts forever.