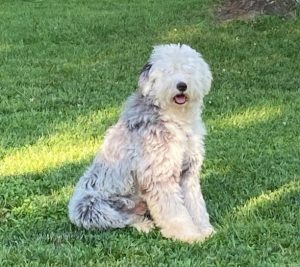 Winston was found as a stray in Bedford NH. The Animal Rescue League of NH took him in and searched for his home. Winston was never reclaimed and was put up for adoption. Two meetings with potential families were set …and it didn’t go well. Winton is a young, VERY energetic, VERY enthusiastic, COMPLELTLY untrained, 63 pound dog. He was just too much for these homes.

I brought OES Quincy with me to the meeting. When Winston was brought out to the play area, I encouraged them to let him off leash as I wanted to see how he and Quincy would interact. I was told  that he played “very roughly”. Nope, not for a sheepdog. His play style and reactions were pure Old English Sheepdog. He and Quincy raced around playing “catch me” and barking their fool heads off. I was then asked if I would take him into NEOESR’s rescue program.

After we introduced Winston to the Merrimack pack (OES Henry and OES Quincy) we did a quick evaluation. We found out that Winston seemed to by a typical young Old English Sheepdog would benefit with a bit of training. OES Quincy took on the role of drill sergeant making sure Winston knew exactly what he was supposed to do. And was quick to let him know when he didn’t behave appropriately. Fortunately Winston was a quick learner.

While Winston was going through “boot camp”, the placement team was working on finding a home for this exuberant dog. A great home was found in Pennsylvania.  Kevin Wenhold was looking for an OES pup to bring into his home. He had several OES in the past and wanted to continue with the breed as he loves the personality of the dogs.  After letting him know what to expect he wanted to bring him to his home. As he has had OES he knew what to do with this boy.

Jennifer arranged to have Kevin meet her in Connecticut at her sisters home.  Kevin was very excited to meet this rambunctious young pup.  They had a wonderful meeting and Winston decided Kevin would be his furever home.  As you can see he is very happy to be with Kevin!

Since joining Kevin he has settled in and is a typical teenager, counter surfing and being spoiled! He loves Winston and won’t quit on him as he is working with a training.

Kevin, thank you for taking on this bouncing bundle of OES !!