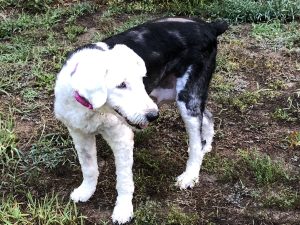 by Jackie and Rudy Dupre

From Puppy Manufacturer to Awesome Companion

The email started “Sheepdog in need of rescue” and was from Furever Friends Dog Rescue of WNY.  They had been notified of an 8 year old, spayed Old English Sheepdog that was being released from a puppy mill and wondered if New England Old English Sheepdog Rescue could either help with a foster home or could take her into our program.  It turns out, Tricksie had been a breeder.  She had to have a cesarean and the puppies were stillborn.  So, Tricksie was removed from the breeding program and turned over to the rescue.

The placement team swung into action. Tricksie was in Amherst NY. Ion Abraham, one of our board members, offered to drive from Lincoln MA to Amherst to pick her up.  The trip was about 450 miles EACH WAY.  Coming back, Ion drove through some very turbulent rain storms.  Fortunately, Tricksie travelled well in the car.  Thank you, Ion!

Tricksie was being fostered with Jennifer and Tom Tyrrell.  Their first report. “Tricksie is a very sweet girl, about 67 pounds with beautiful brown eyes. She can also be considered very high-energy. She appears to be house-trained.  Pet her, give her an ear scratch or a butt scritch…and her stub wiggles at high speed!  And like the typical OES, Tricksie is a Velcro girl.  She WANTS to be with you.

Tricksie is ok on the leash, pulls a bit, but not too badly.  She is ok around other dogs…as long as they are well behaved and don’t get in her face.  She pretty much ignores the cats – even when they get in her face or race under her belly.

She is very interested in … well… everything.  She will put her paws on the table or counter just to see what’s going on.  Oh… I mentioned that she’s “high-energy”.  Well, she did jump onto the table.  Yep…just jumped up.  Sigh…so some training will be in her future.

We think this is a lovely girl that will make a great companion. She will need a bit of training (not to jump on tables or people) but she seems very responsive to correction.”

Tricksie’s vet appointment showed that she had an ear infection (not unexpected), anemia, a couple of bald spots, and that she needed some dental work. The veterinarian thought that the anemia was due to her recent pregnancy and the bald spots were most likely hormonal.  She was provided with an antibiotic and an antiseptic shampoo to see if that would help.  Fortunately, she was fine with baths since she was being given one every couple of days!  But given the anemia, we wanted to wait until we got the veterinarian’s “all clear” before we arranged for a “dental” and found her a new home.  A couple of weeks later, we got her blood tested again…and all was good.

Now, we just needed to find the right home for her.

We had recently received an application from Jacqueline Dupre, offering to be a foster home.  She was also interested in adopting a dog. Hmmmm.  A quick call ended up with a meeting being scheduled…the next day.

It was a beautiful September afternoon when Jacqueline Dupre and Rudy Ternbach drove up.  They were greeted by the resident OES pack (Henry and Takin) along Tricksie.  Tricksie put on her very best manners.  She took Jacqueline and Rudy for a walk to show how well behaved she was on the leash (she’s really pretty good), and then she took Rudy for a short walk through the woods (Tricksie just loves walking through the woods).  When Jacqueline saw Tricksie and Rudy came out of the woods, she was convinced that Tricksie was the right dog for them.  The adoption papers were signed and she was soon on her way to her furever home.

Latest update “We just love her. She is a sweetheart.  She is such a gentle and dainty girl.  We went for a walk in the woods with our 6 year old grandchild who wanted to hold the leash.  Rosie behaved beautifully! Rosie loves walking in the woods. She seems to prefer it over walking on the streets.”

The new name?  She never really seemed to respond to her name, so we just tried a whole bunch of different names.  She responded to Rosie.”

Rosie has successfully completed her career transition from puppy manufacturer to awesome companion.