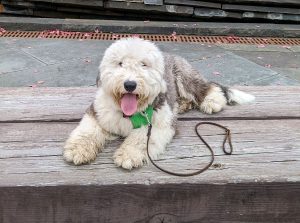 Stanley is a 1 year old that the family got from a breeder in Pennsylvania when he was 9 weeks old.  The family had 3 children, ages 2,3, and 7.  The husband was a firefighter for the military and was gone for long stretches at a time.  And they had just recently moved to NY.  The wife was overwhelmed with taking care of 3 young children AND a young Old English Sheepdog.

They had been able to provide some training for Stanley.  He was familiar with most basic commands: sit, down, settle and leave it.  He was also timid and easily frightened.

Jane Bruce offered to be a foster home and evaluate the boy.  She arranged to travel to NY to pick up Stanley.  She sent the first update the next morning.

“The owner was lovely- and she was so appreciative of your kindness and understanding- she was on the fence about giving him up, but once she talked to you she knew it was the right thing for him.

He was perfect on the car ride- he wants my little cat, Sissy, to be his friend! He is sweet as sugar and she didn’t mind him a bit.

Of course he was a bit anxious; did some crying in the crate, but then he calmed down. He let out one “play bark” to try to entice the cat- other than that WE HAVE YET TO HEAR HIM BARK!!!!!

He is the ultimate velcro dog- can’t stop kissing us! Definitely not a dog to belong to someone with 3 kids under 6!”

We were not surprised to receive an email the next day “Danny and I would like to officially adopt Stanley. Where do we sign and what is the preferred form of donation- He’s a very sweet boy”