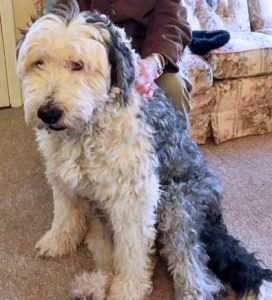 Sasha is an 8-year old, spayed female OES located in Binghampton, NY whose owner had died.

It turns out that Sasha’s first owner, died about 2 years ago.  Her fiancé, took over the care of Sasha and Maddie a pitbull mix. Then tragedy struck again and the fiance died this past September.

Shirley, the fiance’s sister, needed to find a home for the dogs quickly because the landlord wanted to rent the home out. Fortunately Shirley contacted Madeline Erickson.  Since Madeline didn’t have a foster home nearby, she contacted Jini Gosinak, a member of NEOESR’s placement team, who started the work on getting Sasha into NEOESR’s program.

Shirley agreed to take Sasha to a vet to get her vaccinations updated, get a health certificate and possibly to get her nails trimmed (they are pretty long).  We contacted 12 vets in the local area…none had any records on her.  Sigh….

Ok…so where was Sasha to go next? We had some tight deadlines to meet.

Nancy Krech had recently lost her 11 ½ year old OES, Sophie. She had adopted Sophie this past March, even though she knew that Sophie wasn’t in the best of health.

We sent Nancy a photo of Sasha with a short message asking if she had time to chat….the phone rang almost immediately “Tell me about her!”  We started out by telling her Sasha’s age and heard “Perfect!  How soon can I get her?” When we let Nancy know where Sasha lived, she immediately brought up Google maps to figure out how long it would take her to drive there and pick her up.  Nancy lives in Wethersfield CT, approximately 230 miles from Binghamton (about 3 hour 50 minute drive – without stops).

We spoke about the situation with the Sasha and Maddie and how the two had grown up together.  Nancy mentioned that her son had been talking about getting another dog….. We soon heard back from Nancy.  Her son wanted Maddie!  Nancy would meet Shirley and pick the two of them up. (No, NEOESR is not getting into pitbull rescue)

The first report from Nancy had the placement team quite concerned. “Just wanted you let you know Sasha is not doing well.  I don’t know if it’s the radical changes in her life (new home new people, and no Matty), the long car ride, some of the medical issues that we know of (lyme disease, ear infection, and the medications she is receiving for those) and the vaccines she got on Friday or some medical issues that we don’t yet know about. She has basically been sleeping since 1 p.m. yesterday when we picked her up.  She has real difficulty getting up and down just to lie down, and steps are nearly impossible.  She’s not helping us when we try to help her get up the 4 or 5 steps to get in and out of the back door.  When we came downstairs this morning, she was sleeping in the living room and did not even raise her head to see who was coming.  I want to get to know her a little better, so my plan is to watch her a day or two before taking her to the vet, so I have more details I can give from my experience…plus it will give her more time to adapt, and rebound.”

The next day’s report was a bit better “We took her for 3 short walks today, each longer than the prior one.  But the longest was just to the corner of our block…2 houses down, but better than the end of the driveway.  Tonight, when we let her out her final pee, she went down the steps and came back up without ANY help.  That’s a MAJOR improvement since yesterday…or even earlier today.”

The third day showed significant progress “Big break-through on Sasha. When I got home from bowling, I put my key in the front door and opened it and she was in the process of getting up to greet me!  Until today, she’s basically been lying flat on the floor.  I said the next milestone I was looking for was for her to get up on her own, not because we were tugging on her or calling her.  I wanted her to just get up to see what was happening…like if I left the room, she might follow me.  I think I can check that box as her getting up on her own.  Now I have to come up with a new next goal. She’s also has had her head up and eyes open more than yesterday.”

Later that week “Sasha is showing more and more signs of life as the days go by.   She still lies down a lot but more alert position with feet under her and head up.  At first, she only laid on her side with head flat down on the ground. I’m seeing progress every day. “

Nancy took Sasha to her vet. “Their scale says she’s 95 pounds! Sasha pants at any exertion, but we all agree she’s out of shape, and getting more exercise will improve that. She’s not liking the cold and doesn’t like being out in it, so we’ve not been going as far the last couple days. We still get her out three times a day, and she’s asking to go out to pee more often, so she’s getting more stairs work. She still doesn’t just walk right up, has to “dance” and figure out the method, but it’s improving. The vet did recommend a joint supplement, like Cosequin so I’ll get her going on that.”

The email ended with “I forget if you sent me the adoption form or is it on the website?” Sasha had her home. Her adoption papers were received on December 25th – Christmas day.

For those who wondered about Maddie the pitbull mix – an update from Nancy’s daughter-in-law: “Maddie is so happy. She barks now! I’m so happy. She is on the couch as well. Our new bed won’t permit that but she has it made here. She is such a lover”