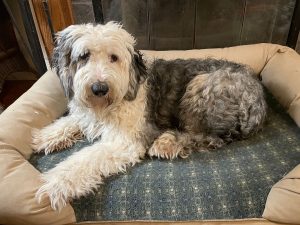 We received a tearful call.  The family needed to give up their littermate brothers because they can’t take care of them and the two “puppies” don’t get along with each other.  It turns out the family got 2 dogs about 4 years ago from Iowa.  The issue is that the two dogs do NOT get along.  When the owners returned from work one evening, they found what they described as a “CSI scene” and that Quincy was found hiding in the basement, trembling.  They had tried trainers, behaviorists…nothing had worked to have these two peacefully co-exist.

It was obvious that these two dogs were very much loved.  After some discussion, they decided to turn Quincy over to NEOESR and keep the other

Quincy is a 5 year old, intact, male OES.  When he arrived at his foster home, he was quite timid.  He would walk around the house growling as if to tell everyone to stay away. Henry, the resident Old English Sheepdog, and the resident cats simply ignored his growling.

Jennifer and Tom Tyrrell, the foster parents, had been considering getting another dog.  But, they had very specific requirements since they do a lot of fostering for NEOESR. They wanted a calm, easy going dog that would get along with other dogs.  They really hadn’t considered adding Quincy to the family. OES Henry had other ideas.  He saw Quincy as a potential playmate.  Quincy soon realized Henry was not going to attack him and started to relax. OES Henry made it very clear that HE would like Quincy to stay.

Jennifer stated “It took Quincy a while, but he has stopped growing while he’s walking around. He even got pressed into “puppy sitting” when we were fostering a 13 week old dog.  I’m happy to say that is a great puppy sitter. Quincy is a great dog. He is here to stay.”