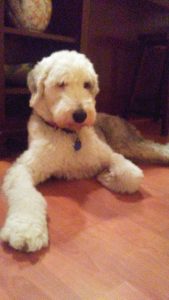 Millie’s new name is Price. When I asked for the story about the new name, I was told that she is “priceless”.

Millie is a true example of how many people work together to help a dog.

NEOESR member, Theresa Hyatt, was contacted by an Ellen, an acquaintance.  Ellen’s daughter is friends with a family that bought an Old English Sheepdog puppy from a breeder in Pennsylvania.  The dog is now 21 months old. They had decided that they could no longer handle the puppy.  The family has 4 kids under the age of 10, as well as the man’s father (who is in the early stages of Alzheimer’s) living in their not-so-large home.  At first, they wanted to euthanize the dog.  But Ellen’s daughter spoke to them and convinced them to try to re-home the dog.

Theresa and Ellen went to check out the dog.  Theresa reported “Millie is in good shape, physically.  She was somewhat fearful of us when we first came in the house and was barking up a storm.   I brought treats with me, knowing that G/A swears by them, and gave some to Ellen, too, to give to Millie.  After a minute or two, Millie came to us, but still was barking a lot and then jumping a lot.  We sat down on the couch, and she jumped up on it and was pawing at us to pay attention to her, which we did a little, but I was talking to the wife as the husband was yelling at the dog to get off the couch.  Which she did not.

Mille is VERY energetic, has not been trained, constantly wears a gentle leader, does not get out much for walks or runs, and from what I was told and saw, doesn’t get any positive attention.  The husband was constantly yelling at the dog, and the dog was ignoring him.  My instincts tell me that there is some abuse going on there, not only with the dog.  He did say the dog was territorial with socks.  He would like to get her out of the house as soon as possible.”  Theresa closed the email by letting us know that she encouraged the family to fill out the dog surrender form from the NEOESR website.

The foster home’s first impressions of Millie: “She is a sweet, very timid girl. When we first met her (she was in Sande’s car), she gave a quiet rumble when we reached in to get the leash. We were able to easily get her out and put in our van.  Shortly after we got started back, she decided that I was ok and gave a kiss.  She’s still not too sure of Tom.  She doesn’t have any leash training. Millie totally ignored the Gentle Leader (which the family had just left on her…all the time).  According to Sande, Millie dragged her former owner out of the house even though they used the Gentle Leader. The Gentle Leader was on her so tight it seemed to be painful and left impressions on her nose…so…we tossed it.  First part of the walk, she was pretty wild, pulling and jumping around. By the end of the second mile of the walk, she had settled down quite a bit and was starting to listen.  Her collar was so tight, we ended up cutting it off.  Millie seems to be ok with the cats.  Except that she wants to wash their faces.

She’s quite timid and was frightened of Henry and Takin (first meeting, she tried to run away from them). After a few hours, she just barks if they come too close to her.”

After a few days, Jennifer reported “She is a very sweet dog. Yes she is timid, is frightened of men, and can use some obedience training. But, I haven’t seen any major issues”

Jo-Ann and Paul Bunevich had recently lost their OES, Baylee (a NEOESR rescue). We called to ask if they might be interested in learning more about Millie (YES!). Jo-Ann and her 15 year old son Chris quickly made arrangements to come up to New Hampshire.

OES Henry and Takin greeted Jo-Ann and Chris with great enthusiasm as they walked through the door.  Mille watched carefully from under the dining room table.  After Henry and Takin were shooed into the office, Jo-Ann and her son sat on the floor.  Millie watched from a careful distance…she was interested in meeting them but….they were new.  Then Jo-Ann brought out some treats.  And Millie WANTED the treats so she streeetched her neck to carefully take one from Jo-Ann’s hand.  It didn’t take too much longer before she gave Jo-Ann a kiss.  It took her a bit longer and a bit more encouragement to go to Chris.  After all, he is male.  But Chris persevered and Millie was soon giving him kisses also.  Millie then took the two on a test walk to make sure they knew how to handle themselves (and her).  Jo-Ann was obviously liking this dog more and more with each step of the walk.

Once back at the house, Jo-Ann signed the adoption paperwork. She is looking forward to help Millie gain confidence as well as some needed obedience training.

A few days later we received an update from Jo-Ann “Great match!  I registered her for a behavioral obedience class where we have taken these broad lessons before.  She has adapted to not lugging me down the front step but waiting patiently while I close the door, which is safer for me than flying down the steps! Each day she gets her two 40 minute walks, in addition to the times I walk her on the leash in the yard.  By Monday I had lost 2 lbs!   She is clearly a Velcro dog with me and watches me out the window if I fill the birdfeeders with birdseed.  She offered her paw to Paul in the morning yesterday without his asking.  She waited with him upstairs on the landing while he was doing something carpentry that was loose upstairs the other evening. She is gentle and loving. She does bark at Paul when he comes home but she comes quietly to me and she will stop.  She is eager to be near him if she allows herself when he comes home to have another room to go to and then she keeps returning.  Then she settles down and accepts him.  Everything has been working out fine. We play with her and I can’t see any problems. I’m really glad you thought of us. We really needed her! Thank you for her.”