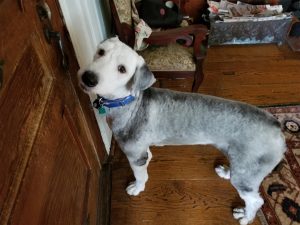 I’m a handsome young (1 1/2) male looking for a new home.  What can I tell you about myself to make you see that I’d be the greatest dog you ever had.  I’m ok with other dogs and I do occasionally respond to some obedience commands such as “sit”, “stay” and “come”.  I even know “time to sleep” means it’s time for me to go into my crate.  I am leash trained and have been told that I’m excellent off leash.  By the way, do you have any toys that need to be played with?  Like maybe a rubber bouncy ball?  If so, I’d be glad to volunteer to take care of it.

Otis, a 1 year old, exuberant, 80 pound neutered male had to find a new home due to illness in the family.  The family member that was ill?  Their four-year old OES has an autoimmune disease which is taking a lot of time.  The family realized that they couldn’t give Otis the time and attention he needed and reached out to NEOESR.

Otis was ok with other dogs and had some obedience training.  He would occasionally respond to commands such as “sit”, “stay” and “come”. Crate training? Otis knew that “time to sleep” meant it was time to go into his crate. He was leash trained and supposedly excellent off leash.  However, he was also your typical 1-year old OES and full of energy.  He would regularly knock the family’s 7-year old son down in his enthusiasm.  And he really liked to play with rubber bouncy balls.

The placement team looked over the applications for this cute boy. It shouldn’t be that hard to find the right home for this large, exuberant dog that liked to play with rubber bouncy balls. There were a lot of applications, all of them great homes. While sorting through the adoption applications, Karen Staff’s name kept coming up. We gave her a call to see if she might be interested in “fostering” (ok…you all know where this is going…right?).  Karen responded “We are more foster fail people than foster people but we are very happy to help with transport  etc.”

First report came from the car ride home after they picked up Otis “He’s gorgeous. Such a loving dog!”  Later that night we got an update “So far, so good. No issue with the cats so far which is great. Our dogs are a little jealous (well, mostly Eloise, who is the younger one). The bad news is he is actually pretty matted all over and has been panting a lot so while he seems to let us gently brush him. I may see if we can get him a grooming/haircut.”

The next morning we got another update.  “Otis did have an accident in the house but that was due to the fact that he was hesitant coming down the steps from the 2nd floor (it is steepish). He seems truly lovely and he like playing with our clowns especially Eloise, the smaller one.”

A few days later “Otis is flying up and down the stairs now. He and Eloise play constantly whether they are running and grabbing each other’s throats or playing tug of war with a rope toy (my favorite to watch -not so much when they use a squeaky toy). Otis isn’t going anywhere.  He is here to stay!”