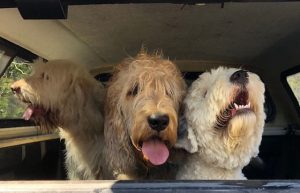 Opal is a 1-year old female OES that was overwhelming a single mom with three children.  After some discussion of behavior counseling, the owner decided that she really needed to give her up to someone who had the time and energy to work with Opal.

Grannie Annie helped out by fostering Opal for evaluation and interim foster care.  After a couple of days, G/A pronounced Opal a perfectly normal sheepdog, adding that she could see why she was given up.  When Opal wanted attention, she wanted attention NOW.  She was otherwise very sweet, with no aggression issues or other behavior problems.

Opal was then transferred to Maine to be fostered by Kim Boutwell and her family.  Kim works two days a week, on days that her husband Nathan is home, so there is always someone at home.  We understood that there was a high probability of foster failure, although we first had to see how Opal would get along with Gilbert, an intact 1-year old otterhound, and Oliver, an 8-year old spinone.  Gilbert was not exactly thrilled with the new arrival, but eventually, particularly after Opal was spayed, everyone eventually settled down.

As had been hoped, Opal has found her furever home.