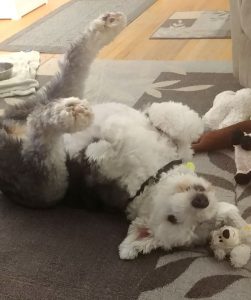 Matilda is a 3-year-old OES from Bowdoinham,ME (about 30 miles north of Portland), that was not good with young children in the home, snapping at them over a bone or other food. She was also a “singleton” puppy, so she did not have much experience sharing with others from early on, and she is also quite reactive around other dogs. She was great on the car ride with me from Maine to the home of Jeanne and Paul Perron, near Worcester, MA, her new foster home.

Matilda was evaluated for Osteochondritis dissecans (OCD) from a front right shoulder injury she suffered when she was 6 months old. The veterinary surgeon concluded that she did not need surgery at present, but that it may be necessary later in life. For now, her OCD just means that she needs to be restrained from jumping off places, as the strain on her joints can make her limp for a day or two.

Several months passed, and Matilda became very protective of the Perrons, which became something of a problem as they frequently have extended family members who live nearby drop by unannounced, including grandkids. Jeanne worked with a trainer to find ways to manage Matilda’s reactive tendencies, but they reluctantly concluded that Matilda needed to be an only dog in a home with fewer people coming and going.

Theresa Hyatt, who had recently lost OES Lily (whom the Perrons had also initially fostered), was nearly ready for another OES, after completing her move from Maine to Londonderry, VT, where Matilda would be an only dog in a much quieter environment.

Theresa’s move extended over some weeks because of renovations in her new place, during which time I took Matilda to meet Theresa for a picnic lunch in a park in Portsmouth, NH. Jeanne and Theresa discussed Matilda’s behavioral challenges, and Theresa agreed to

find a trainer in VT.

Matilda has been making great progress, but the overall consensus is that she is a very anxious dog, not confident, and is over-protective of her home and Theresa, where she has been slowly coming out of her shell, as you can see.