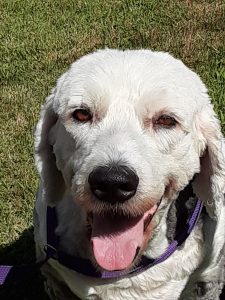 Buster is a 3 ½ year old, intact male that was previously used as a stud in a breeding facility. He looked like he’d had a very rough 3 ½ years. He had sores all over his body, ulcers on his tongue and a two-inch long skin flap on his back.  We weren’t sure what happened to him, but it wasn’t good. In spite of this, he seemed to be very sweet and stoic.

Buster’s first stop on his journey to his new home was at Carol Gefell’s.  She stated. “He is incredibly sweet. He pushes his head against mine and just holds it there. I’m not getting much emotion out of him yet but he’s quite the talker. His entire back and sides are covered with sores.  It looks like they are healing without any infection so I did not do anything with them as touching them is extremely painful to Buster.”  Carol continued “I have had dogs in and out of here all day and Buster really reacts positively to that. I think he’d do best with a companion.”

Debra Girard had fostered dogs for NEOESR in the past.  And she was looking for a male dog.  Currently she had a 7-year old female OES AND a 35 year old macaw.  It sounded good to the placement team.  When contacted, Debra agreed to foster Buster.  We informed her of Buster’s sores and Debra quickly set up a vet appointment for a couple days after he arrived.

Denise Beehag and Jill Turner agreed to help transport Buster the 200 miles from Batavia NY to Little Falls NY where they would meet Debra. Denise sent a text “Handoff complete. Sad to say goodbye. He’ll make a great dog.”  Jill followed up after she passed Buster off to Debra “Poor guy has a hard time getting comfortable because of the open sores on his boy parts. He is gentle and shy.”

Debra sent a quick note once she got Buster home. “Just wanted to let you know Buster is doing fine with Miss Daphne.  Only issue so far is apparently he doesn’t know how to do steps.”

The vet’s report diagnosed Buster with a severe bacterial skin infection. The doctor said it was possible that he had laid on his side in something caustic and then licked himself causing the burns on his tongue. An antibiotic was prescribed as well as a regimen of medicated baths.

Debra provided an update. “We are calling him Jasper. It seems to suit him. It means hidden treasure which he is developing into. He is doing well – the sores seem to be closing up and he is perking up as he feels better.  The vet wants another treatment next Tuesday and she is thinking that will be it for now. So far he and Daphne are getting along and having playtimes together.  We are working on the housebreaking – he comes right in and poses to get his diaper on – too cute!”

Latestet update from Debra. “Jasper is doing great.  He and Daphne enjoy playing together.  He is a velcro boy. He has established a routine – almost like he has always been here!”