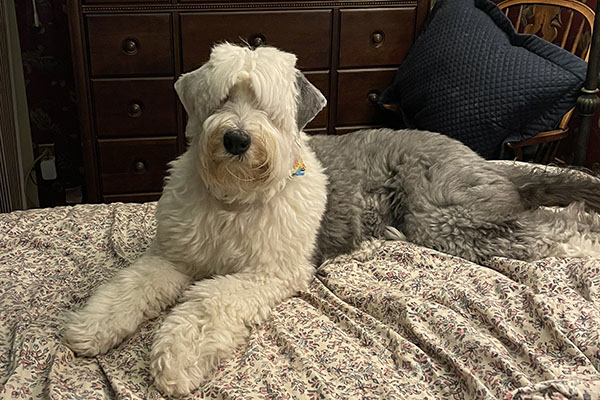 In early January, we received a call from a woman who had a 6 year old, 69 pound, female OES, Gracie. The woman had some significant medical issues and was reluctantly looking into finding a new home for Gracie. The owner called her a “good girl” and mentioned how sweet Gracie is many times in the conversation. We found out a bit about Gracie.  She has “beautiful blue eyes” and a tail. She knows some commands; sit (sometimes), down (sometimes), Stay (not so much) and come (sometimes). She would pull heavily when on the leash. This wasn’t an issue with her owner as she was in a fenced in yard. We were also told that Gracie is a barker. If the tv is on and has an animal, a football, or a wheel on it…she barks at the TV. In the car, she barks. A few days later, the owner called us and let us know that she just wasn’t ready to give up her girl.

Three months later, the owner called us again. It was time. She was no longer able to take care of her beloved Gracie. There was just one little issue. Gracie was in Pennsylvania, just north of Pittsburgh. We had to make plans…that day as the owner was going back into the hospital.

The owner arranged to get Gracie to a local kennel. This gave us a bit of time to arrange a foster home which would be able to evaluate Gracie. We reached out to Marian Feil, a long-time member of New England Old English Sheepdog Rescue. She could take Gracie but wasn’t able to pick her up until Sunday. Marian lived on the opposite side of the state, just north of Philadelphia, about 300 miles away. A quick call to the kennel confirmed that they could keep Gracie until Sunday.  We also arranged for her to be groomed so Marian would travel with a sweet-smelling dog.

We received a text from Marian on Sunday night. It showed Gracie on Marian’s bed. Marian said “We had an uneventful drive home. Once we got here, Gracie quickly found her way upstairs and hopped onto my bed.(Note: she had never slept in her owner’s room) Next day Marian provided an update. “Yep…she slept on my bed last night. She’s really a sweet girl.”

Later Marian stated. “Gracie really does pull hard on the leash. But it’s not a problem as I have a fenced in yard. I just have to get her to eat. She’s a grazer. My other dogs are not.”

This was followed by “Gracie is really coming along. She likes to watch TV. She’s a happy girl. Her tail wags all the time.” Gracie was there to stay.