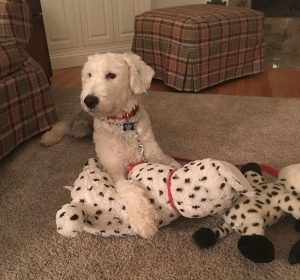 George is one of the dogs from China.

Carol and Ken Hodder had let the placement team know that they would be willing to be a foster home. Even though we didn’t have much (any) information on
the dogs coming in from China, they still cheerfully agreed to foster one. Carol’s biggest concern was if Monty, her senior OES, would get along with a foster. 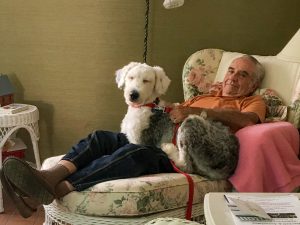 First reports from Carol: Hope you don’t mind, we’ve decided to call him George. He seems to be extremely loving and sweet. George is full of energy. He loves racing around out back. He isn’t quite house trained yet, but we are working on that. I’ve been trying to keep George off the furniture – and this morning he was in the sunroom with Ken. Look what was going on while I was making breakfast!  (Note: in George’s defense, he really isn’t on the furniture…he’s on Ken!)

On the next update: “George and Monty are getting along well. Don’t bother looking for another home for him.“