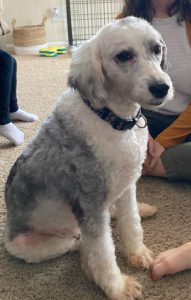 We got a call from Furever Friends Dog Rescue of WNY.  They had a sheepadoodle that wasn’t doing well in it’s foster home.  Their young child was sitting on the couch with Shelly and told his mother that she was purring….then she snapped at him (we are guessing that the child didn’t know the difference between purring and low level growling).  It was an air snap and didn’t connect but… Shelly needed a new home.

It turned out that Shelly is a mini sheepadoodle weighing about 35 pounds!  Jackie Dupre offered to take her in.  Since Jackie lives in South Hadley, MA, we needed to make transportation arrangements.  Denise Beehag would pick up Shelly in western NY and meet Jill Turner.  Jill would transport Shelly to Albany where she would meet Jackie.  We received a text from Denise “The guy said she didn’t like to eat.  I had some cheddar cheese and blueberries as a snack…held out my hand and she gobbled them up.”  Jill Turner sent an update after the handoff from Denise. “She is very good in the car.  So tiny and very sweet.”

Jackie let us know that when Shelly met Rosie, their resident OES, it was as though the two recognized each other.  A veterinarian’s appointment was set up.  Not surprisingly, she had an ear infection. And the vet said she was overweight and should be around 30 pounds.  A mini sheepadoodle indeed!

Jackie let us know that her name was now Ellie and that she was settling in. “She and Rosie are bonding.  They are a mutual education team. Ellie has taught Rosie to bark.  Rosie is showing Ellie where to pee and poo. It doesn’t take any time at all to brush or clip her. I couldn’t ask for nicer dogs.”

A few weeks later we heard from Jackie “Rudi loves this girl.  She’s here to stay”.