Mary Alice and Tom Dwyer had just lost their 13- year-old OES to congestive heart failure. When we contacted them to see if they might want to foster one of
the dogs from China, we got the usual questions: How old is he? Not positive, approximately 3. What’s his personality like? Don’t know. How big is he? Don’t know. (We hadn’t received their medical records at that time). Is he house trained? Finally, a question we could sort of answer: He waits to go until he leaves his kennel. 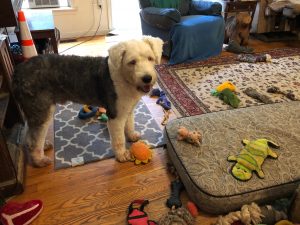 Jennifer and Tom Tyrrell were the first foster stop for Da Mao. They sent a quick update the day he arrived in the United States. Da Mao has striking blue eyes. Like the other dogs, he is very food motivated (if you have food in your pocket, his nose will be in your pocket), he is a counter surfer and he really, really likes stuffies (he’s been busy herding them up and stashing them around a bed). He is an incredibly sweet, loving dog. He gets along with other dogs and is ignoring the cats. Obviously, he’s pretty jetlagged. But I think a couple of days of a regular schedule and plenty of rest will help that.

Interesting trivia…Da Mao is the name of a famous Giant Panda. So, Da Mao is named for a Panda, a popular name for sheepdogs.

Mary Alice and Tom met Da Mao and he quickly worked his way into their hearts. Soon he was on his way to Maine.

Da Mao gets an A+ for car manners. He was completely mellow the entire time, even when we had to switch cars in Portland. He was a bit overwhelmed in the dog toy store and the floor was very smooth and he couldn’t figure out how not to slide – it was hysterical! We walked to the lighthouse and back after he ate, and he did well on the leash. They planned to “foster” him.

Next update: He’s a really nice dog, very athletic and has walked about eight miles a day with Tom each day this week. They do two to three walks a
day and even did a hike on Thursday. He’s learning very quickly and walks great on the leash. He loves to walk. So far, he’s perfect. But he is a big dog. It’s OK. I think we’ll manage. By the way, we’ve renamed him Dyson after the British vacuum since he put everything in his mouth.

Dyson has his furever home.