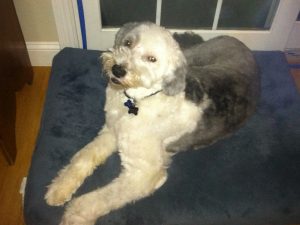 We first heard about Duke when we saw his photo online.  Since he was at a rescue in Upstate New York, we sent a quick note seeing if NEOESR could provide assistance.  Duke’s foster mom responded. “He is a really sweet dog. He had a visit with the vet and we found out he had surgery prior to being surrendered. He had a traumatic injury where his femurs were dislocated from his hips so there was a surgery to correct it but the femurs were not re-attached to hip bone. He is 2 but is already showing signs of arthritis.”  The rescue followed up by sending NEOESR the x-rays they had taken of Duke’s hips.  Ugh!

After chatting back and forth, the folks at Misfits Rescue asked if NEOESR would be willing to take Duke in. They thought we would have a better chance of getting him into the right home and finding him the medical attention he still needed.

While all the travel arrangements were being made to get Duke from New York to New Hampshire, the placement team was busy trying to get an appointment set up with an orthopedic specialist.  This is where our networking paid off. NEOESR member Jane Bruce’s sister worked at Angell Animal Hospital in Boston. Jane’s sister provided a couple of names and recommended that we call to make an appointment as soon as possible as everyone was backed up. The soonest we could get an appointment was 3 weeks later, with a doctor that was described as “FABULOUS”. We took it!

First update “Duke is a very gentle, loving, well behaved dog.  He travels well in the car, he is leash trained, house-trained, and seems to know some obedience commands. He gets along with other dogs and seems oblivious to cats. “

The placement team managed to find out a bit of Duke’s history. He was picked up as a stray in Kentucky at the end of March. His new owner took him to the vet to get his vaccinations. Because he was limping, the veterinarian thought it might be a possible ACL tear and referred him for a 2nd opinion. The 2nd vet diagnosed Duke with Coxofemoral Luxation (aka hip dislocation) and recommended an FHO – which was done in the middle of April.  For some reason, the owner couldn’t take care of him anymore and turned him over to Misfits Rescue.  Which is where NEOESR came into the picture.

Three weeks later, Grannie Annie (aka G/A) and Jennifer Tyrrell took Duke to Angell Animal Hospital. On the way to Angell, Duke charmed G/A and regularly reminded her that she had TWO perfectly good hands AND they could be used for petting dogs.

Dr Sue Casale observed Duke’s gait and poked and prodded him (he kissed her face). We then had him sedated so they could get a good x-ray. It was obvious that looking at the x-ray that whoever did the FHO was not as skilled as one could hope. The left hip area…well it’s ok. Not great, but ok. The right…not good. It turned out that Duke had osteomyelitis (bone infection) as well as a proximal femoral fracture.  Duke was put on antibiotics for a month in hopes of healing.

A month later, we took Duke back to Angell for a follow-up exam. While the x-ray indicated like the bone infection had improved a bit, there was still a non-union of the break in his leg. Dr. Casale stated that Duke would need surgery. She would insert an implant that would stabilize the leg and use BMP, bone morphogenetic protein, to encourage the bone to grow and fuse together. But she was quite concerned as she wasn’t sure there was enough healthy bone to support the implant. There was no guarantee that the surgery would work. But it was Duke’s best chance. The cost of the surgery was $3,000.  Given the cost, we had to get the Board of Director’s approval. The Board’s vote was unanimous – get Duke the surgery.

After the surgery Dr. Casales reported “I feel really good about the surgery. We installed a plate and I believe we got it in solid bone”. She was much more positive about Duke’s prognosis than she was on our initial visit. On the more human (canine?) interest side, she had a lot of people coming up to tell her what a sweet dog Duke is. We agreed – Duke was a really sweet dog.

Duke still had a long way to go.  For the eight weeks following surgery he had to have VERY limited activity. He was not allowed to jump, run, or use stairs. While indoors, he was confined to a 4’ x 4’ pen.  He was only allowed out to pee or poo, and he had to be carried up and down the stairs. It was hard work to keep his activity was limited, particularly when he started feeling better and wanted to play with resident OES Henry and Takin. But we kept our eye on the goal…to heal Duke’s leg.

The 2-month post-surgical checkup finally arrived. It seemed to take forever for the x-rays and exam to be done. Dr Casale finally came out. She was thrilled with how well he is doing!  The fracture had healed!  Foster parents Tom and Jennifer gave a huge sigh of relief.  It had been a very long 4 1/2 months.

Duke was still very weak due to his exercise restrictions over the past few months (muscles atrophy very quickly).  But gentle exercise and physical therapy should have him back in shape quickly.

Duke was now ready to go to his furever home.

Tony and Bettyann Caputo were ready for their next sheepdog.  They came to meet him. They saw him. He conquered their hearts. Duke was soon on his way to his new home.

A recent update from Bettyann. “Duke is doing beautifully.  He is the sweetest sheepdog we have had – just a great dog.  We started him physical therapy and he’s going to be using the underwater treadmill to help build up his leg.  When he gets tired, he does favor his leg a bit.

Thanks to the wonderful members of New England Old English Sheepdog Rescue, we were able to get Duke the medical attention he needed and he has a great life in front of him.