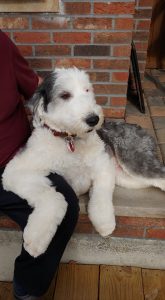 Daisy was an intact 4 year old girl that needed a new home.  We were told that she lived with three other dogs that ran loose in the yard and she and would growl at them when they came near her when she was eating.

NEOESR members, Michael Durski and Guy Maki lived close by.  We reached out and asked if they would be willing to check out the situation and let us know what they thought of this girl.  Michael set up a meeting and we received an email shortly after “Daisy needs to come out of that house!  There are a least 5 dogs if not more because she has a relative living with her who has dogs as well. Daisy is under weight ..the living conditions are not the greatest.”  A couple hours later another email came in from Michael “The owner called. I’m heading out to pick her up!”

The first opening Michael could get at his vet’s was over a month away.  However, being quite resourceful, he found an opening at a PetVet clinic at the local Tractor Supply for the next day and took her in.  It turned out that Daisy was only 52 pounds.  And of course, everyone commented on how beautiful she was.

Michael continued to work to have Daisy socialize with his pack of 3 Old English Sheepdogs.  “I truly believe her behavior is due to letting her run in what she called a wolf pack as well as not being spayed.”  A few days later he reported “Poppy crawled up on my lap. I don’t  think she’s an alpha dog otherwise she would have gone after my dogs when they were let out. She was scared. I think the growling and nipping that was reported was all in her protecting herself.”

Michael stated “She is cracking me up and stealing both Guy’s and my hearts. She has total run of the house with no muzzle and continues to sleep on the bed and cuddle in during the night. She seems to be attached to my hip when not exploring. A few small lip rises to the other dogs but that is fewer and fewer.”

The placement team was thrilled when the following note came in “Once again for the third time for me and the first time for Guy, we have failed Foster 101. Guy and I decided years ago to forego exchanging of Christmas presents and instead just decide on one present to get for us and the house. Daisy will be that present this year for not only us but for Mr. Humphrey , Ms. Molly Mae and Ms. Willow. Ms. Daisy Mae will join the crew. What better way to enjoy a Holiday season and a New Year for all of us including Ms. Daisy.”