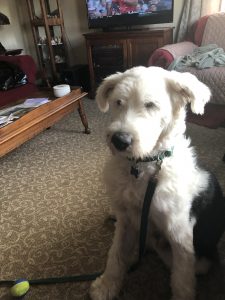 Corby is one of the dogs from China.

First note from the foster home: “The Merrimack pack is keeping Corby busy. Corby was poking in the toy box, and Tom told him he could play with any of the toys. We really weren’t expecting him to play with all the toys at the same time! Corby’s favorite band is the Beach Boys. He really likes their song “Counter Surfing USA” (yes, he’s a counter surfer). Corby is very interested in the cats. He’s already pushed his nose a little too roughly at a couple of them and gotten smacked down.”

Rescue dust was flying. Brian and Chris Sullivan had just lost their OES. They were looking for an Old English Sheepdog that would be OK with their cats.

When Brian heard about Corby, he quickly set up a time to meet him. Corby demonstrated what a good, loving dog he is. He showed Chris and Brian toys that he liked. He took them for a walk (gotta make sure your potential new family can keep up). Brian was absolutely appalled when he learned that Corby was taken from a “meat truck” (yes, he really was removed from a meat truck). The next morning Brian called. We want Corby.

From Brian: The new love of Chris’s life. What a dog. So happy and just wants to be with us. Loves his mommy and she loves him. A match made in heaven.

Corby is safe, wanted and loved.