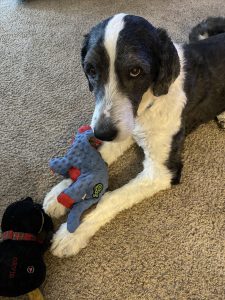 Adopted by Ken and Carol Hodder

Baxter, an 11 year old, intact male, needed a new home after his owner died.  A family member had taken him in, however it wasn’t a great situation.  They lived on the second floor on a busy street.  And Baxter was having some trouble with the stairs.  Although the family really tried to make it work, they decided it would be better to rehome Baxter.

The family called New England Old English Sheepdog Rescue’s hotline at 11:30am. They were hoping we could get him into a foster home quickly (actually, they were hoping to turn him over to us THAT DAY…which was a Sunday…and just before a huge snowstorm was going to hit)!  We quickly made a list of potential foster homes in Connecticut and started calling.  Ken and Carol Hodder were available.  They agreed to foster Baxter IF he and their OES George would get along.  Even if the dogs didn’t get along, Carol said she could take Baxter in for a few days to give us time to make other arrangements.  Phew!

Carol contacted the owner and quickly set up a meeting for that afternoon at Baxter’s home. George wasn’t too thrilled on meeting Baxter.  He stiffened a bit and barked at Baxter. Baxter barked back.  Ken and Carol didn’t think the dogs’ behavior would be a problem. By 7:30, that evening, Baxter was safely in his foster home.

First comments from Carol “Baxter is an extremely sweet dog.  He moves pretty easily. I don’t think his hips are that bad. His coat is in pretty good condition…just a bit of matting behind the ears.”   She also provided a hint of things to come “Ken really likes this dog”  hmmmmm.

Baxter went to the veterinarian and got his health certificate.  Everything went extremely well. Carol really wanted to get him groomed so she set up an appointment at her groomer.  It didn’t go well.  Baxter DID NOT want to be groomed.  Carol contacted her veterinarian for a recommendation and set up an appointment with a different groomer.  As soon as Baxter put his paws in the door, he stiffened up.  Nope…not gonna happen.  Baxter snapped at the grooming pole.  Carol was not going to let Baxter win.  She consulted with her veterinarian and came home with a “bad boy” cocktail – a combination of Trazadone, Gabapentin and Acepromazine that would help keep Baxter calm while he was being groomed.  The “cocktail” worked.  Too well.  Baxter snoozed through the whole appointment.  The groomer had to lay him across 2 grooming tables and 2 people worked on him (Did we mention that Baxter is about 100 pounds…and long?)  OES George didn’t recognize him when they got home. He thought we brought another dog home when he saw Baxter in the driveway.  Next time they take him to be groomed, they are going to reduce the dosages a bit.

Baxter continued to get settled in.  Much to OES George’s consternation, Baxter grabbed all the squeakie toys and wouldn’t let George near them. Carol let us know “Baxter really likes his squeakie toys.  He’ll carry them around and squeak them. I didn’t expect that with an 11 year old dog. Baxter is a talker. He just stands there and talks to you. He is turning into quite a watchdog.  He has a real deep bark.”

We weren’t surprised when we got a call from Carol.  “We want to officially adopt Baxter.  He is here to stay. He and George have resolved their major differences…George gets to sleep in the bedroom with us, Baxter doesn’t. “